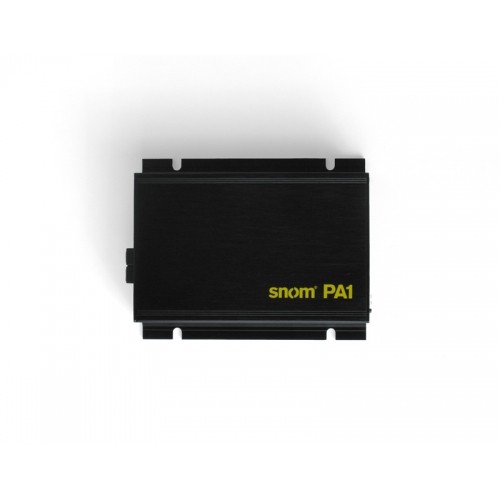 The audio control system Snom PA1 augments your existing SIP PBX with another component of modern communication. The Snom PA1 unites the functions of a telephone with a high-performance digital amplifier for broadcasting announcements and supplying background music to assigned rooms, hallways, and office floors.
An announcement via Snom PA1 is effected simply by initiating a call from a Snom telephone with its handset, headset, or via handsfree mode. An efficient 4 Watt amplifier provides sufficient coverage for the entire room or floor space. Several Snom PA1 units can be connected to each other via the built-in switch and can be connected with any available loudspeaker on the market, thus enabling customers a great cost-saving contribution with already installed components. The individual network cables can be up to 100 meters long; otherwise common quality impairments caused by long stretches of cabling do not occur. The Snom PA1 can be optionally installed on walls or ceilings. The Snom PA1 can be power-fed either via conventional power supply unit connection or through Power-over- Ethernet (PoE). The specific addressing of individual Snom PA1 control systems can be centrally configured via the device’s web interface. Aside of the leading SIP protocol, the Snom PA1 can also be addressed via Multicast, thus enabling one transmitter to simultaneously address many receivers. As with all other Snom terminals, updates and configuration changes for the Snom PA1 can be centrally effected over the server. For maintenance purposes, the Snom PA1 has two 3.5 mm jacks for headset connection. Four freely programmable output pins can be utilized for controlling the Snom PA1 via its web interface.

THE SNOM PA1 DOES NOT COME WITH ANALOG SPEAKERS